I recently attempted to migrate my site from Ning 2 to Ning 3 and had a horrible experience. This migration was started two months ago and is still not done. Here's what happened:

In Feb, I contacted Ning to ask about migrating. I got no reply. Suddenly, a Ning 3 site appeared 3 weeks later. Ok, I can work with that. I started to work on designing the site. I also contacted Ning again to coordinate  a data migration time. Again, no reply. After a couple of weeks and no reply, I went onto the Chat-Live-Thingy that appears on my site and talked to one of their techs, Alex, who said he was actually the person in charge of my site migration and that my prior unanswered mail was going into a spam folder and that he would mark it so that it would not happen again. We set the date for March 19 and Alex told me he would contact me and let me know when it was done. No contact ever came. Several e-mails and contacts through Chat later with other Ning people, I discovereed that Ning considered the migration to be complete, even though I identified a major problem and specifically mentioned that I had not heard back from Alex. Alex then got back to me and said that my mail had again gone into a spam folder and that he would fix it. That was in late March and nothing has changed since. The migration is not done, I am still operating my Ning 2 site, and out there sits my Ning 3 site, unfixed and untouched. I have not heard anything from anyone at Ning in 2 weeks.

This is the worst customer service I have ever experienced.

Security Alert! Please Delete Code for my Old Apps such as Smileys IMMEDIATELY!

NEW Sharing Option I Have Been Working On

Hi everyone! This is TJ, a Ning Apps developer for many years.  Looks like some Ning Creators are…
See More 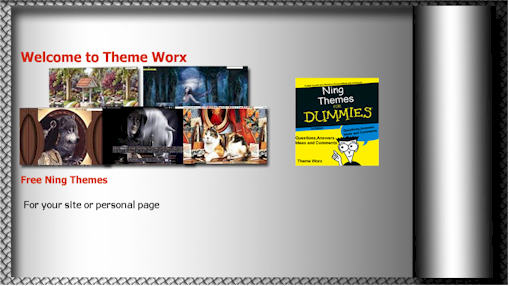 "thank you very much I come from the times of this site now I put the photo, it was hard to survive…"

"To do a border without the ridge and using dots you would just write it like this
border:13px…"

I want to put ads above individual groups.Jen showed me how to put text above forum categories…
See More "I don't use file manager for photos, so if it's a photo I'm not interested even if after I close…"

"I agree with you, but I want it rounded, on the square it gives no problem,this is an impossible…"

"It's because you are using the ridge as a border, to create the ridge the border property adds the…"

" show the css you have used for the border"
More…
Loading ...